Centre of the Universe 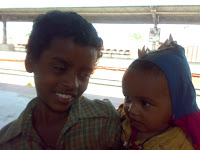 I was in Belgaum a couple of months ago, waiting to catch the train home.  As usual we had swarm of beggars all around us, coming in some strange randomness. The young and abled would come first, this will be closely followed by the variety that limps followed by very old women. The increasing degrees of pathos that the line up generates taxes human emotions. 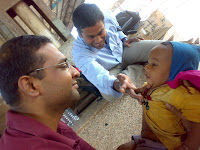 To a very large degree, I am immune to beggars who are able bodied. I am partly immune to the limping variety. I generally succumb to the old and the aged. I fail to comprehend why someone as old as my grandmother, barely able to move, hardly see, has to go out every day into the world and beg for food. I feel cheated being a part of a nation that is all fart and no action, especially when it comes to the aged. The grains that we allow to rot every year is sufficient for two times of food for all the poor and needy elders in this country. I wish I was working with the government, I would have at least given it a try!

The elderly also remind me of the intrinsic imperfection that exists in this world. Truly, God is surely not a communist, how else shall we explain the lives of 75 year olds spent on Indian roadside, without shelter, without clothes, without food... without medical care, without human company? When I look at these beggar women, I wonder if they ever begot children, sons and daughters who abandoned them. Many of these women are schizophrenic, and have clearly been thrown out of their homes.

Amidst all these thoughts, I was suddenly accosted by two kids, one around 8 years old and the other around 15 months old. I and Rajkaran (a colleague) took a break from our waiting for the train and spent some time with the duo. For those couple of minutes when our world came together, the child was the centre of our little universe. The baby took immediate liking for me, maybe because she found that she had a little more hair than I had on my head :)

Popular posts from this blog

That Fluttering of Broken Wings

June 13, 2014
If you were to cross the road and hurt your toe, I know that I will never know. As we go on to take different roads and move on across different shores, there is something that happens to our relationships. Something that estranges, disconnects, disintegrates. I know that you still think of me. I know this because I find myself thinking about you. And thoughts rarely get seeded on their own. It comes from you to I and from I to you until one of us is alive. Old relationships rarely die. Like broken winged moths, they hang around dark alleys of forgotten memory lanes. Ever so often, I can hear one of them flutter its wings. Not too close but never too far.
10 comments
Read more