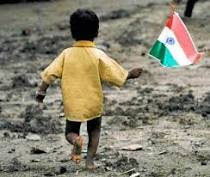 My office boy has a young baby girl who has just begun to take her first few baby steps. On my way out, I see her hanging on to the gates and making baby-like noises. She is an optimist; I have not seen her cry. Yesterday on my way back from the supermarket, I bought half a dozen bananas for her. The mother was surprised, it was unexpected.
At the supermarket, I remembered the choices I had as a kid. We were just about “middle-class” but we had enough food to eat. There were baskets of mangoes, litchis and five guava trees. There were biscuits which I and my sister would hog over and sweets during every festival. Today these choices are not available to 80% of Indian poor. The onion sells at INR 75/- a kilo, tomatoes at INR 72/-. Barely edible rice is over INR 30/- A doctor’s visit costs INR 250/-. Last year, over 17000 farmers chose to die rather than plod on until their next crop-loss. Many more will die. The rickshaw-wallahs, pavement dwellers, scavengers, municipality workmen, housemaids, office boys, masons, carpenters, plumbers, and the rest of the poor, will all die. They will die of hunger, or the sheer pressure to sustain life in Indian today.
The least I could do was giving the baby half a dozen bananas.
Rajesh

December 02, 2013
Not all days are the same. There are those nameless faceless ones that are born out of ennui and quickly fly into oblivion. Nothing good comes from them. All they do is burn rubber. They don't take us closer to our destination. Then there are those days when the skies open up. There is an earth scattering screech, the kind you know will give way to a loud bang. Scarred for life you limp along, again. Crying over those who died and hurting for those who refused to ride with you again, you ride, for this is the only option you have known. And then there are those rare rare fairytale days. The ones that starts off without a cause but go on to transform themselves into days of momentous impact. These are those days that leave behind magical memories. That feeble hint of a smile amidst deep furrows of pain are from days as these. Travelers in time that we are, let's pray for short burst of sunshine and a fair share of fairy tale days.
9 comments
Read more